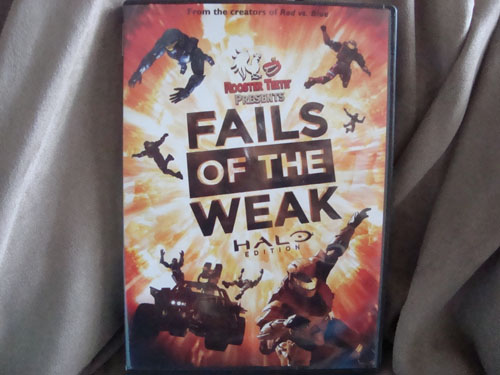 Yesterday, Cinedigm and Rooster Teeth Productions (the creators of the famous Red vs. Blue web series) partnered up and released a compilation DVD of Achievement Hunter’s hit Youtube series of fails, bloopers, and amusing clips from the Halo franchise. Fails of the Weak: Halo Edition features videos of the funniest fan submitted “fail” clips from the hit video game series, Halo. These fails range from silly deaths, crazy glitches in campaign mode, and one of my personal favorites; dick bounces. Accompanying the footage is hilarious commentary from the cast of Achievement Hunter, Geoff Ramsay and Jack Pattillo.

Fails of the Weak was created in 2010 when Geoff and Jack decided to try something new and showcase the fans hilarious clips from their adventures in Halo: Reach. The clips varied from glitches with NPCs in campaign, funny encounters with other players in multi-player modes, and see-it-to-believe-it deaths. The series was a hit and continued up until the most recent Halo game, Halo 4. Fails of the Weak: Halo Edition packs all of these hilarious clips into 60 minutes of laughs you will want to watch over and over again with your friends. The DVD also features behind the scenes clips of the shenanigans over at Achievement Hunter called “AH Life” in the menu, sneak peeks of projects from Rooster Teeth including a preview of the new anime RWBY, and interviews.

From the minds of Red vs. Blue, the RTX convention, and more; Fails of the Weak: Halo Edition will be enjoyed by Halo and video game fans alike. The DVD retails at $9.95 and is available for purchase straight from the Rooster Teeth Website.